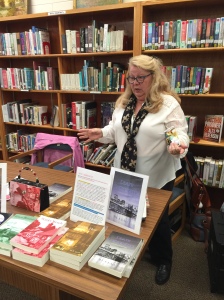 I just had my second book signing and my first experience co-signing with my friend and mentor, Marni Graff. I was surprised at the ease in which we were able to blend our thoughts and ideas, and talk about our books. It felt natural, sharing the stage with Marni. We’ve discussed books so often that in many ways, it just felt like a discussion among friends. Of course, the lack of nerves on my part may have been from the amount of cold medicine I’ve been taking.

I first met Marni Graff when she was hosting open mic events at a bakery in Washington, North Carolina. She called it Writers’ Read and several writers and poets would come and share their work. I was attracted by her unflappable style and grace. I followed Marni to Belhaven, when she moved the Writers’ Read to the public library after the bakery closed. When she became a presenter at the first Pamlico Writers’ conference, I knew I had to attend. I’ve attended every writers’ conference since.

Over the past few years Marni and I have become close, first as student and mentor, and later as friends, and writer-sisters. I have learned so much from Marni, she is a patient teacher, mentor and friend. She has pushed me to stretch my talent to judge a competition, review others’ works and even submit my own work to agents and contests. It because of her faith that my story was ready that I leaped into the publishing fire and self-published Chrome Pink.

I resisted self-publishing for years because I wanted the dream, to have an agent or editor believe in me and take on my project. After having the experience of an agent, I learned that by going the traditional route, you give up a lot of control. When my agent broke up with me, I began to embrace the idea of having complete control. It’s frightening and a little intimidating but with the push from Marni, friends and family, I finally did it.

Sitting at the table, discussing our books and fielding questions from the audience is a dream I never allowed myself to have. Having the book signing with my friend and mentor, is a priceless gift I will treasure for a life time. I appreciate my library manager Robina Norman for setting this up with her colleague, Sallie, and to Sallie for making this book signing a lovely event, thank you.