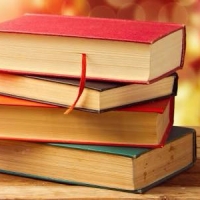 Donald on Dining in and Out.

Stories and photos from Scotland

A place where books and imaginations spring into life

“So many books, so little time.”